See what's new with our games We hope you all had a great beginning of a new cycle! And wish you all an amazing 2021 where you can keep fighting the Darkness like the heroes you are!

We know you all have been expecting for new updates on Chronicles of Drunagor: Age of Darkness, and we hope you will all be glad to hear that we are still working on schedule!

How is delivery logistics going?
The New Year worldwide really brings us more obstacles than the ones we’ve already been having these times. As you all well know, Eastar, our partner in charge of the whole CoD: AoD production is based in China. And if New Year is a busy time worldwide, the Chinese New Year, which is about to begin in February, may be even more as it is a huge event and mobilizes the entire country.

Since you’ve all been a great community and supporters throughout our whole campaign, we want to be completely transparent with you. So here we go.

What does that mean in details?

On our side: We have booked availability in ships and containers months in advance, as we already knew this time of year gets insanely busy in China. And we did have in mind all this time our scheduled date for delivery of CoD: AoD.

Not only that, but the games are being closed and packed inside Eastar as we write this update. So the production is going non-stop since we started it and it’s been a lot of effort to ensure that.

In addition to that, we just received news that many people in China are quarantining again now or on the verge of doing so, as there has been a rise in COVID-19 cases.

We want to assure you once again that we here at CGS, and also all of our partners involved, are working their hardest to make all of this come true, and will keep doing so.

With that explained, we have received lots of questions and doubts regarding the boxes and how the components will fit inside them. Even though we don’t have final, high-quality images to show you exactly what you’ll be receiving, we wanted to bring you a sneak peek of how your CoD: AoD Core box will be arranged.

What you may have not figured yet is how all the components are going to fit inside this giant! So that’s what we want to show you today layer by layer.

The first thing to jump inside your CoD: AoD’s Core box will be the Monsters’ Trayz containing the Undead King! We think it’s best to keep it buried under everything we have. You don’t want that evil thing roaming free!

You can see that squared hole in the middle, where all the cubes fit nicely.

And on that empty corner, you have enough space to put all the smaller Dungeon Trayz. So it will look like this.

On top of that comes the bigger Dungeon Trayz

We have to start sealing that Undead King and for that, we need something larger. That’s where the other Monsters’ Trayz come in! The empty spaces you’ll notice on the top there will make sense in a little while. Don’t forget them!

Best bury these other monsters as well! So on top of them, there comes empty Trayz! Yes! They won’t be empty for long. Keep this emptiness in mind!

These two pieces look perfect to hold some of the dungeon maps that represent the beautiful yet dangerous world of Drunagor! And our bravest heroes and explorers! The slayers of Darkness! So we’ll just put those on top.

Now take a look at these beautifully designed organizing Trayz that will be holding your small components like cards, dice, and tokens! (Empty spaces? Looks like a hint?)

These will all fit nicely on top of the heroes and maps. You’ll probably be asking about the empty ones! And we’ll get to them in a second!

What comes after will, in the future, fill all that emptiness. Poetic isn’t it? Punchboards! Who doesn’t love punching all these tokens out?

That solves the mystery! All the empty spaces inside the organizing Trayz are to fit all these marvelous tokens. Some will go in the middle of the small Trayz. There are six of them, enough to separate them by type if you so wish!

There will also be this obscure bag where you’ll draw the Rune Tokens from when you’re playing.

On top of all that, there is still the Interactions Book, packing dozens of gorgeous artworks and plenty of opportunities for our heroes!

And finally, the Heroes’ Sheet so that you may record your progress in a Campaign Mode, comes together with more dungeon maps and the Door Cards!

There is also this beautiful and scary lid to protect your CoD: AoD components, but not for long as we hope this game will be on your table a lot!

So how’s that for the Core box? Remember that once the tokens and pieces are out of the punchboards, there will be that much space for you to store other components!

Tell us what you think about this organization. We want to hear your opinion and doubts on everything!

Last but not least, why don’t you comment here on what you’d like to see or read on our next update?

Until we see you all again, farewell, brave heroes. And keep fighting the Darkness! 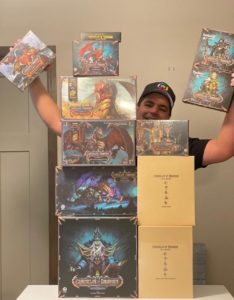 Chronicles of Drunagor: Age of Darkness production is finished 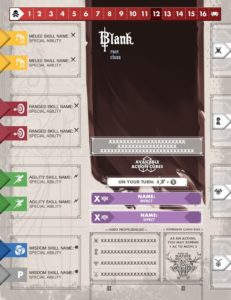 Come meet us and our new project at SPIEL DIGITAL! Great award we got in Europe Gamefound draft to the apocalypse campaign

Chronicles of Drunagor: Age of Darkness production is finished

Creative Games StudioCreatorFebruary 13, 2021Greetings, brave heroes of Daren! It’s probably rather sooner than you were expecting a new update, however, we know that you

And here we are, back with more news on Chronicles of Drunagor: Age of Darkness! We welcome all of you! We know you’re all eager

Today we want to bring you some good news about the production phase of CoD: AoD and some explanation about the virtual demo of the